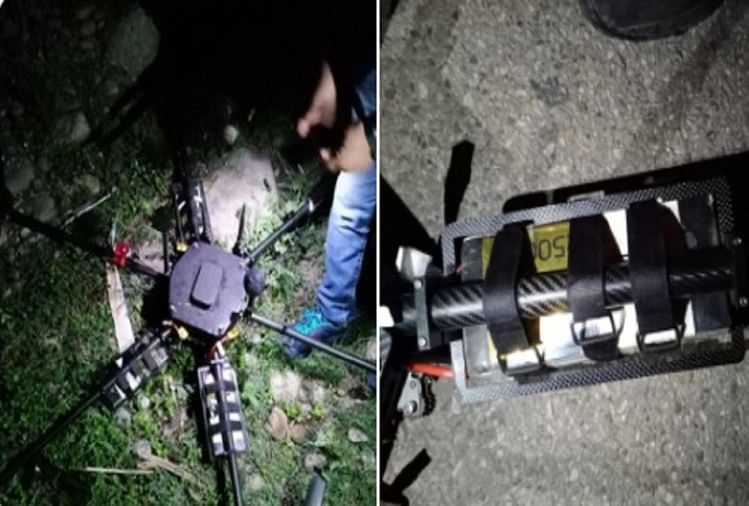 A Pakistani drone has been shot down by the police in the Kanachak area of ​​Jammu and Kashmir. According to news agency ANI, five kg IED has also been recovered after the fall of this drone. Police said that the drone was hit within six kilometers of the Indian border.

Let us tell you that for the past several days, there have been reports of drone sightings on the border. Intelligence agencies have already expressed the fear that terrorists may be trying to carry out some big conspiracy through drones. At the same time, the security forces have also made a strategy to deal with this challenge and it is believed that this drone that was shot down is the result of that.

Indian Air Force station has been targeted by drone
On June 27, terrorists attacked the Indian Air Force station by dropping explosives through drones. Two people suffered minor injuries in this attack. Since this attack, there is an alert from the police to the army in the valley. PM Narendra Modi had also called a high-level meeting regarding the emerging threat on drones.

Lashkar’s conspiracy behind the drone
Security agencies have expressed apprehensions that the terrorist organization Lashkar-e-Taiba is behind this drone conspiracy. Terrorists are trying to carry out a major incident like June 27. The police department is worried about the continuous use of drones by terrorists. DGP Dilbag Singh has asked the police officers to rework the security strategy. Along with this, it has also been asked to be cautious about the use of drones by terrorists.

Share
Facebook
Twitter
WhatsApp
Telegram
Linkedin
Previous articleCM Dhami’s big announcement regarding Devasthanam board, the government in favor of amending the act, the decision will be taken soon
Next articleUttarakhand: Roadshow of Chief Minister Pushkar Singh Dhami in Rudrapur, enthusiasm among workers

Two Hizbul Mujahideen terrorists have been arrested from the Chhatru sub-division of the Kishtwar district. Along with this, the security forces have also succeeded...
Read more
Jammu Kashmir

The IED has been found near the railway crossing at Naugam in Kashmir. Traffic on the national highway has been stopped. Also, a large...
Read more
Jammu Kashmir

The nefarious face of Pakistan spreading terrorism in the Kashmir Valley has once again been exposed. The medicines and other items recovered from the...
Read more

The demand to dissolve the Devasthanam Board was raised in a joint meeting of All India Yuva Sadhu Samaj and Chardham Teerth Purohits held...
Read more

Devasthanam Board: After the assurance of CM Dhami, the ongoing dharna in Chardham postponed

Dehradun. Pushkar Singh Dhami is the name of such a person, who is never afraid of criticism, but tries to improve his shortcomings by...
Read more

Himalaya Day 2021: Black carbon is spoiling the health of the Himalayas

Apart from the Gangetic plains, black carbon reaching the high Himalayan regions from European countries is spoiling the health of the Himalayas. Research conducted...
Read more

Uttarakhand Governor Baby Rani Maurya resigned from her post on Wednesday. The President has accepted his resignation. Governor's secretary BK Sant has confirmed this....
Read more

The discussion about the third wave of corona infection in the country is in full swing. It is being claimed in many reports that...
Read more

State Chief Minister Pushkar Singh Dhami has sounded the election bugle through the Jan Ashirwad rally on Friday. He stayed in Srinagar on Friday....
Read more

Fake News: Supreme Court expressed concern about the content of web portals and YouTube channels, said – they are running anything

The Supreme Court expressed serious concern over fake news circulating on web portals and YouTube channels in the absence of a regulatory mechanism. The...
Read more

Actor Siddharth Shukla passes away due to a heart attack

Bigg Boss 13 winner Siddharth Shukla has passed away due to a heart attack. Siddhartha was only 40 years old. Presently his body is...
Read more
Load more

Devasthanam Board: After the assurance of CM Dhami, the ongoing dharna...