Satpal Maharaj filled the enthusiasm among BJP workers, said that the workers are more concerned about the country than the family
S 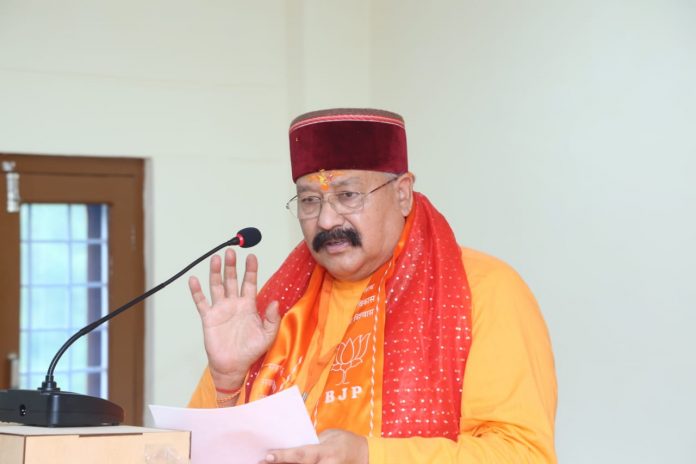 Chamoli. Bharatiya Janata Party is a party of such workers who care more about the country than their family. He is engaged in the service of the country day and night with dedication. The said thing was said by the district’s in-charge minister and cabinet minister Satpal Maharaj while addressing the district office bearers of the BJP in the meeting of the Bharatiya Janata Party District Working Committee at Gopeshwar on Wednesday.

Minister in charge of the district and cabinet minister Satpal Maharaj, while speaking in the BJP District Working Committee meeting called at Bharatiya Janata Party District Office, Gopeshwar, said that we are ordering the officers of all the departments to do the work of the party workers on a priority basis. . He asked all the workers to forget all the grievances and work with full devotion. He requested the workers to make every effort to take the schemes of the state and central government to the people.

In-charge minister Satpal Maharaj told the BJP officials and workers that he had come to charge the workers. Have come to listen to their pain. While infusing enthusiasm among the party workers, Maharaj said that it is our endeavor that our workers should be strong. So that he can work among the people by getting involved in public welfare works. He told the workers that in view of the Covid period, we have made a big start in providing employment to the local unemployed by shortening the big contracts in the irrigation department. Not only this, but Maharaj also said that he would also make such arrangements in his departments. Going to do so that the local unemployed without prior experience can get small contracts. Giving information, he said that through the Public Works Department, poor widows or abandoned women would also be given employment for cleaning the drains located on the side of the roads at the local level.

While addressing the District Working Committee, Satpal Maharaj told about the schemes of the state and central government and said that the country is progressing under the able leadership of Prime Minister Narendra Modi. Today, Prime Minister Narendra Modi has made the country wealthy again by supplying the Covid vaccine to many countries of the world. Under the Pradhan Mantri Garib Kalyan Yojana, more than 15 lakh tonnes of food grains have been distributed free of cost in the fourth phase. More than 80 crore people are getting benefited from this scheme.

Giving information about the development work being done in the state by the state government under the leadership of Chief Minister Pushkar Singh Dhami, along with the Pradhan Mantri Kaushal Vikas Yojana, Jal Jeevan Mission, and PM Modi Health Card scheme, he said that many development schemes could be implemented in the state. have been Under the centrally funded Pradhan Mantri Krishi Sinchai Yojana “Har Khet Ko Pani” at a cost of 1589.00 lakh, approval has been received for the construction of 57 sixteen and 149 electric pump sets under four clusters, on which construction work is being done. He said that under Kisan Urja Suraksha Utthan Maha Abhiyan (KUSUM), all the diesel pump sets of the state would be converted into solar. For this, along with the approval of the Government of India to convert 338 pumps into solar, an amount of ₹ 15 crores has also been received.

Satpal Maharaj said that about 20 thousand diesel pump sets are installed in the state. Which will be gradually converted into solar pump sets, which will reduce the agricultural cost of the farmers as well as increase the income. After the meeting of the District Working Committee, Minister-in-Charge, Satpal Maharaj, inspected the houses in Haldapani’s Papadiya on the spot and assured the local people that their problems would be resolved immediately.

Make estimates of all motorways in two months: Maharaj
After the meeting of the District Executive Committee, State Tourism, Public Works, Irrigation, and Culture Minister Satpal Maharaj said that 100 percent budget should be spent on development works. He gave clear instructions that any kind of negligence in development works would not be tolerated. He said that all the schemes should be implemented in time. During this, the Minister-in-Charge, Maharaj, directed the officers to immediately solve the problems of the people who came under the JD of the landslide in Papadiya, Haldapani. Maharaj also ordered the officers to give an amount of two crore rupees from the disaster item for the treatment of the submerged site.

JP Naddha said, the country is in strong hands, now the army does not take the permission of the government to answer the enemies.

Election strategist Prashant Kishor has resigned as an advisor to Punjab Chief Minister Captain Amarinder Singh. He resigned stating that in view of his...
Read more
Politics

Congress veterans will find the way to victory in Yognagri, agenda will be decided regarding assembly elections

The demand to dissolve the Devasthanam Board was raised in a joint meeting of All India Yuva Sadhu Samaj and Chardham Teerth Purohits held...
Read more

Devasthanam Board: After the assurance of CM Dhami, the ongoing dharna in Chardham postponed

Dehradun. Pushkar Singh Dhami is the name of such a person, who is never afraid of criticism, but tries to improve his shortcomings by...
Read more

Himalaya Day 2021: Black carbon is spoiling the health of the Himalayas

Apart from the Gangetic plains, black carbon reaching the high Himalayan regions from European countries is spoiling the health of the Himalayas. Research conducted...
Read more

Uttarakhand Governor Baby Rani Maurya resigned from her post on Wednesday. The President has accepted his resignation. Governor's secretary BK Sant has confirmed this....
Read more

The discussion about the third wave of corona infection in the country is in full swing. It is being claimed in many reports that...
Read more

State Chief Minister Pushkar Singh Dhami has sounded the election bugle through the Jan Ashirwad rally on Friday. He stayed in Srinagar on Friday....
Read more

Fake News: Supreme Court expressed concern about the content of web portals and YouTube channels, said – they are running anything

The Supreme Court expressed serious concern over fake news circulating on web portals and YouTube channels in the absence of a regulatory mechanism. The...
Read more

Actor Siddharth Shukla passes away due to a heart attack

Bigg Boss 13 winner Siddharth Shukla has passed away due to a heart attack. Siddhartha was only 40 years old. Presently his body is...
Read more
Load more

Devasthanam Board: After the assurance of CM Dhami, the ongoing dharna...

UPCL took a big step, now if there is a power...